The Newest Addition to Hilltop 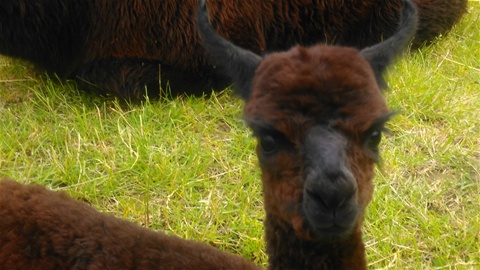 Our second Cria was born at 8:30pm on Thursday 23rd June. A girl called Blanchett - dark brown fleece. The whole birthing process took almost an hour and a half, which according to one expert, is pretty normal. Mother and baby are both doing fine and Bronson, the first born is also thrilled with his new companion.

Blanchett weighed in at 8kg, 1kg lighter than Bronson but still looks smashing. The weather has been cooler and wetter these last few days and so Blanchett has been weating a Cria Coat to keep her warm and dry.

She is easy to rub down as demonstrated by one of our recent visitors, a three year old girl, who walked right up and rubbed down the little Cria without her flinching or moving.

Although Bronson (our first born) is only four weeks old now, he looks almost have grown-up already.

All is well here at Hilltop and we hope it continues like. Until next time.