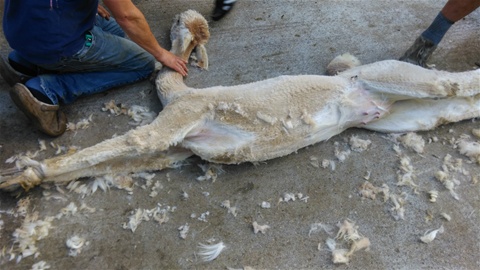 Saturday 2nd July was shearing day at Hushabye Farm Alpacas. Paul at Hushabye invited us to bring our two ladies over there to be shorn with his animals. 7:30am was starting time and we were asked to be on site at 8am and were able to do so because a part-time farmer we know loaned us his small livestock trailer. Apollo and Astra and their Cria, Bronson and Blanchett were somewhat nervous at the sight of the trailer initially, but made themselves at home within minutes of climbing in.

It was a busy day with Hushabye Farm having 33 alpacas to be shorn and there were our two ladies. The guys who were doing the job are professional alpaca shearers from New Zealand who will have shorn over 4,000 alpacas this Summer all across Europe. They were a team of four and it took three to shear each animal, but the process itself took just 5 minutes. Another guy with them who was interested in learning about the animals was also with them and he clipped the alpacas nails. Some of the animals were not happy to be shorn they screamed and spat for the duration of their shearing, but when the wool was removed, you could see they were happier to have the 2.5kg coat removed, allowing them to cool down. The photograph above shows Apollo being sheared. The animals front and back legs were tied to keep the alpaca quiet in order that the wool can be shorn with damaged being done to either the shearer or the alpaca.

Catriona, myself and our two girls helped out where we could on the day and both Paul and the shearing team appreciated the assistance. Our two Cria wandered around and watched their parents being sheared, but didn't seem to be all to be upset by it. In fact they were extremely well behaved,

But neither our day nor our alpaca's ended there. Oh no. As per Paul's advice and a previous agreement between us, Apollo and Astra were 'covered' once again by Hushabye's Supreme Male Alpaca - Goldsmith - who helped produce the wonderful Crias we currently have. Apollo and Astra are both due to give birth between the 7th and 13th of June 2017. Our herd will be increased to 6 by then, all going well.