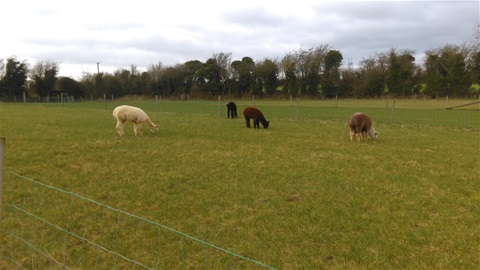 The long wait has finally come to an end. Our two mothers, Apollo and Astra, had been split from their Cria, Bronson and Blanchett, in order to wean them. Unlike cows or sheep, it takes female Alpacas SIX WEEKS to 'dry up'. It had been a difficult split in the beginning but soon the alpacas and the humans came to terms with it.

Anyway, Saturday 11th Februray saw them re-united after a full six and a half weeks apart. We had expected something different to what happened, but it was great to see all the same. It was as though they had known what was happening before it actually did. There was a glint in each of their eyes, a knowing look.

When they were re-united the mothers and babies sniffed and licked each other and then began to run around the paddock in a celebratory jog. Like a lap of honour. But wouldn't you know it, Bronson attempted to drink from his mother; but she wasn't having any of it. She continually moved away from. She knew she had nothing for him. So, not wanting to leave it there, not wanting to give in that easily, he tried Astra. But she let him know in no uncertain terms that he was not wanted around her if that was all he wanted. She kicked out at him, not striking but warning him to stay away. It looked hilarious though. Imagine a normally refined animal who walks paddocks as though she is the Queen of the land flicking out her back leg like a bad ballet dancer.

Within fifteen minutes of being back together it was as though they had never been apart. The photo attached is of them not long after the reunion. Then last night, the babies sat beside their mothers after spending six and a half weeks like lost sheep, in each others company - never apart.

Well, the reunification of our alpacas was less of a drama than we would have expected. Maybe the large drama associated with such occurrences is only a human trait. Alpacas are much more restrained, in every way.

The next big days ahead include shearing and birthing, but neither are until June. But I'm sure I'll have another blog for you all by then.

Don't forget, you can contact me if you want to visit us (our alpacas) or you wish to acquire some of our alpaca wool produce. We still have two hats left, one adult size and one child size. Both have been created by local artists with our own wool.