Both good and bad things make us what we are... 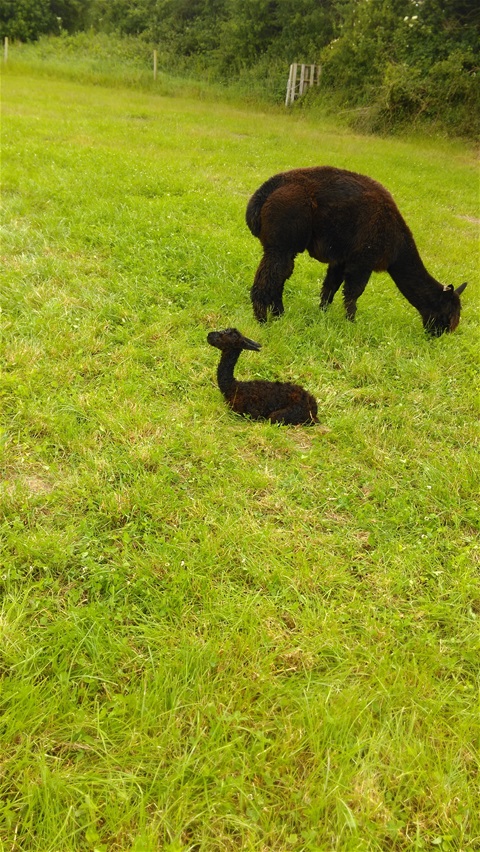 At Hilltop Farm Alpacas we experienced extremes of good and bad at the weekend just gone. Our alpaca farm will be just two years in operation this coming October and already we have undergone changes that we would not have anticipated twenty four months ago. We have had births, our own yarn, and work I would not have considered doing and evenings out in the paddocks with our docile and lovable animals. But we experienced out worst episode yet last Saturday.

Our two pregnant mothers, Apollo and Astra were due to give birth in the first week of June, the 7th to be precise. This is an exciting time for any alpaca farm with new cria (babies) running around freely without a bother in the world. You could watch them springing around the paddocks for any amount of time and never get tired of it.

One thing you should know about Alpaca is that they are known to go over their due dates for anything up five or six weeks. However, last Saturday, Astra went into labour and after what seemed an age after her waters finally broke, she gave birth to fabulous looking black boy (photo attached). We gave him the name, Caesar. He had very long legs and a long neck and was just a stunning looking animal.

We allowed him and his mother to get to know each other for a while before we stepped in lifted him up off the grassy floor of the paddock. Having gone through this process last year with our first two births, we began to realise that there was something not right. Caesar had sat up for only a short while and then lay back down. Over half an hour had passed since his birth and he should have been moving somewhat more.

With some distress it was decided that we should call the vet. When we brought in Caesar, the vet told us that the cria had swallowed some of the fluids when his mother's waters broke and that his lungs had water in them. Caesar died in the vet's surgery after the vet almost pulled off a miracle. Darren from Hannigan Griffin Veterinary in Tullamore was brilliant but there was nothing even he could have done for Caesar.

It was a very distressing evening in our house after it hit home that the little fellow was dead. It was a hard lesson learned - everyone who has livestock, will at some stage have deadstock. Nothing is perfect.

But the weekend was not all bad. I brought three of our other alpacas to the National Alpaca Show in Dundalk on Sunday. First up were the girls and both of them won prizes in their categories. But the real surprise was yet to come, Bronson, our one year old male, won three rosettes. He finished up as RESERVE SUPREME MALE CHAMPION 2017 in the National Show. He also drew the most attention from on-lookers. He is fabulous looking animal, but I think he knows it.

So what I am telling you is that for every bit of bad luck or news you recieve or experience, there is a balancing bubble of good fortune waiting for you also.

But life is all about learning; and working with alpacas on your own land will teach you more about life that you would expect. Even with the bad news, it is a fabulous way of life.