Have you heard; it's a herd 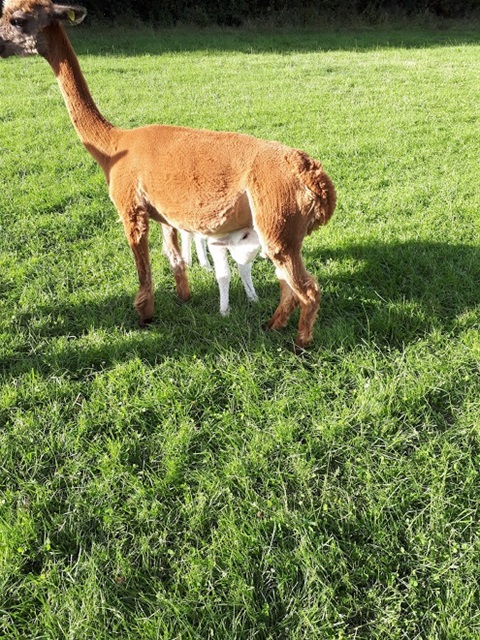 Hilltop Farm Alpacas can probably now be correctly called a Farm. It wasn't that we on the farm were trying to deceive you at any point because a name is just aname, right? Well that's kind of what we thought initially. We had to call the place something and given that we are located on a slope that looks out at Croghan Hill we gave it the name Hilltop Farm.

But since we started back last September twelve months with two pregnant girls, we now have nine animals. Yes that's right, nine alpacas are residing at our Farm. I don't feel so silly calling it a Farm now.

Last Friday we brought in our newest animals - a seven year old mother and her ten day old Cria called Fudge and Cloud respectively. (We named the Cria)She is a pure white fuffy girl.

But there is an existing connection believe it or not. The new mother, Fudge in the attached photo, is also mother to one of our existing girls - Bella, a fawn alpaca who was Reserve Fawn in this year's national show. She has pedigree and some of that will no doubt have been passed down from her mother. You will see what kind of progeny Fudge gives when you see the posture and size of Cloud (Feeding from her mother in the picture).

So, to end this piece where we started, Hilltoip Farm Alpacas can be called a Farm without feeling silly.