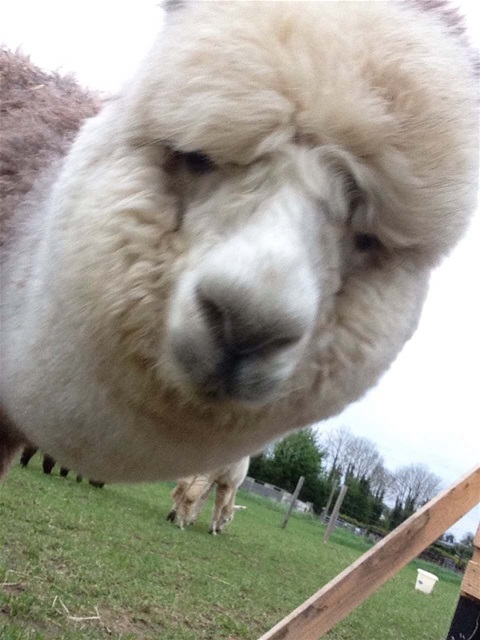 That's a quote from the famous actor Charles Bronson, who we at Hilltop Farm Alpacas are saying we allowed to share his name with our gorgeous grey alpaca called Bronson. He may not be Hollywood royalty but he certainly knows how to hold his viewing public's attention.

Yes indeed, our Bronson is a show stealer, just like the man who shares his name. There has been quite a lot of interest in Hilltop Farm Alpacas of late and we have seen a big increase in visitor numbers here.

There are currently 11 alpacas on show and each has their own separate tendencies. Each of them has an attraction - something that pulls you in the direction of these friendly and docile animals. Some of them, particularly the younger ones, come down for a nose. They are always interested and want to investigate new people who pay them (and us) a visit.

In particular, the three girls who share a paddock (two black fleece and one fawn) come together, like a woolly package and almost try to out do each other for attention.

But, just like they say in Hollywood, you ain't seen nothin' yet until you've seen Bronson. He is an entertainer and especially with young children. He loves to tickle and hear them laugh them laugh, and, there is absolutel no way that a visitor will get away without rubbing him down, at least once.

So maybe he doesn't look like someone (or something) who leans on a mantlepiece with a cocktail in his hand, but he might not seem all that out of place with a celebratory drink of some sort, near him.

If you want to come see our Bronson and his pals, phone me, send me a text, contact me of Facebook or send a message on our website - www.hilltopfarmalpacas.com.