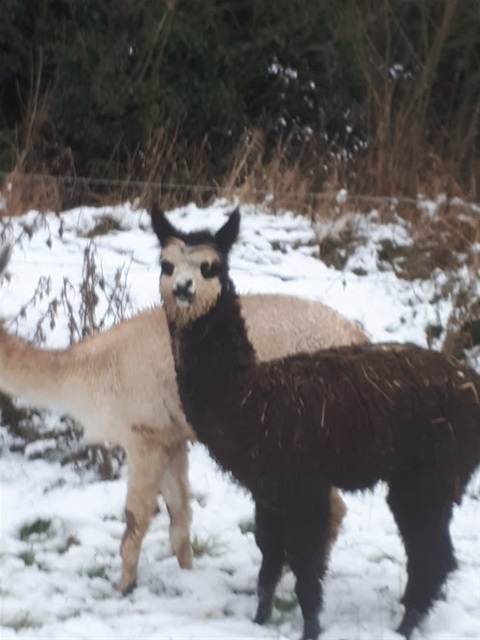 Snow at the right time of the year looks great. Everywhere is covered in a blanket of a pure white frozen layer of dust that had earlier fallen from dark menacing clouds so silently. But after a day it gets in the way of normal life - as we know it.

If you live outside town - far enough away that vehicular transport is the only way in - a heavy fall of snow can be annoying. Transport to and from the places you would normally travel to can even be dangerous.

And then there are the extra clothes that need to be adorned just to get outside. Winter coats and woolly hats become a necessity. That is of course if you are not an alpaca.

During our recent snowfall we at Hilltop Farm made sure we dressed up warmly before heading up to see our herd each day. A cold wind blew down the hill and it was cold. But our alpacas seemed to be in their element. They just carried on as if nothing had changed. And the heat inside their fleece was unbelievably warm.

Even though the deposit of snow had frozen, they were still able to pick at it and find enough to satisfy their needs even though there was always enough hay available in their shelters at all times.

Yes, it was no joke during that recent snowfall, unless you were an alpaca and you could make little of it. These are hardy animals even though you would not believe it as you watch them wander around so calmly, looking like they need all the help and assistance you can give them. But I think they know what we think and they just take advantage of us.

I think the humans were the joke in the alpaca world. But who couldn't fall for these lovable and docile animals.