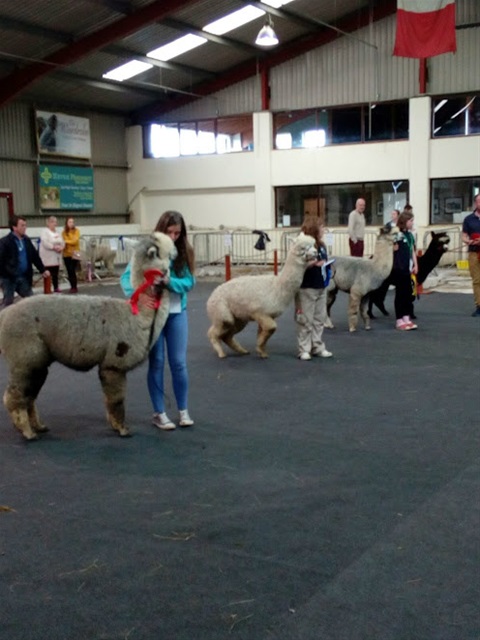 When it comes to alpacas, the animal's individual characteristics are not one of the main reasons for someone wishing to acquire these animals especially if they intend on increasing their herd. A male (macho as they are known in South America from where they hail) is normally purchased because of his condition and his presumed ability to help produce excellent progeny.

But what if your male is of good quality and has great characteristics? Is that even possible?

Yes is the answer. The Irish National Alpaca Show was held last Sunday (22nd April). A renowned judge from England was invited by the Alpaca Association of Ireland to preside over the competition.

It was a long day, the animals were penned before 9am and were out and loaded up on their trailers after six that evening. Some were tired and getting a little upset - but not our Bronson of Hilltop Farm Alpacas. There were over 80 alpacas competing for prizes and our boy reached the Supreme Male final. He had already won his intermediate grouping and then the final for his category.

But that was just half of the story. Bronson wooed the crowds with his character. He leaned over his pen so encoraging all passers-by to rub him down - and they duly did. I was approached by several alpaca farmers who were interested in having Bronson 'cover' some of their females and some wanted to know when he would be involved in the production of cria (alpaca babies).

Even the yarn spinners at the show were interested and I have since been contacted by them in order that they could have his fleece.

Even the alpaca judge was impressed with Bronson's body structure and his exceptional fleece quality.

So there it is; as important as it is for the animal to have good quality fleece and body structure, character is almost as important. Last Sunday proved that once and for all.

Attached is a photo of Bronson winning his first Rosette at the show.