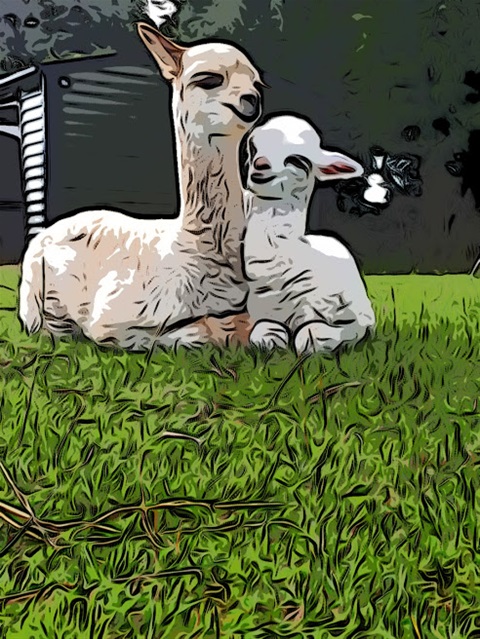 Do these places really exist?

We have heard of these communes and groups that live together as a community in general peace. Where males and females live separately and meet at certain times during the year for certain important meetings.

Could this really happen today?

And could it occur without dissent among the members?

Well, the answer is yes, and we have watched a local commune live and grow together in this way.

Where is this community, you might be asking now? Let me tell you what we have seen and how close this group has become.

We have no idea what the group calls themselves because they do not communicate with us verbally but they do share their feelings with us using body language.

This group is not like those we hear about in stories from around the world and occasionally see on television especially when things go terribly wrong. No, they allow us to mix with them and they allow us to watch them as they perform their soothing and calming exercises each day. It is magnificent to be a part of especially during the recent restrictions on movement put in place because of the global pandemic, Covid-19.

But I’m just giving you a general taste of what it is like mixing with this particular group. Let me tell you about a certain recent incident which demonstrated how tight this band of like-minded individuals actually is.

This entire story took place over a three-week period. It commenced when the most senior female took ill. They allowed a special doctor to come and see her and it appeared that the old lady had developed a lung problem and was or was on the verge of contracting pneumonia. She received special medical assistance for a ten-day period before the decision was taken by the specialist that she needed an even more dedicated medical attention. The one difficulty with this was having to travel to the work-place of this expert. She eventually agreed to go because deep down she probably realised that this would be her best chance to a full recovery from the terrible illness. We were able to assist her to get there and to make it easier for the older girl to manage being away from her group, her daughter went with her.

This old lady and her daughter were away for seven days and the females at home performed their mindfulness during that time to ensure that they could continue in a state of restful ease. It was so impressive how they managed to maintain a soothing sentiment among them, as a group.

Regrettably, the old lady lasted just two days. It appeared her lungs had been damaged much more than originally surmised. She deteriorated rapidly on the second day and eventually it was decided that medical assistance would be required once more.

After spending a little time to listen to her lungs, the medical person decided after agreeing with all those present that the old lady should be put to sleep so that she would be able to escape the agony she was suffering with. But before the final injection could be administered, all of the group – males and females – formed what could be described as a guard of honour from their paddocks. It was impossible not to feel admiration for the entire group.

Us humans believe that we are untouchable when it comes to celebrating life and dealing with death. But we here at Hilltop Farm Alpacas have seen that alpacas are far better and the spirit created in their community is far more understanding of what is occurring around them and are much better at dealing with it.

Yes, alpacas have a gloriously impressive community sense than most other groups.