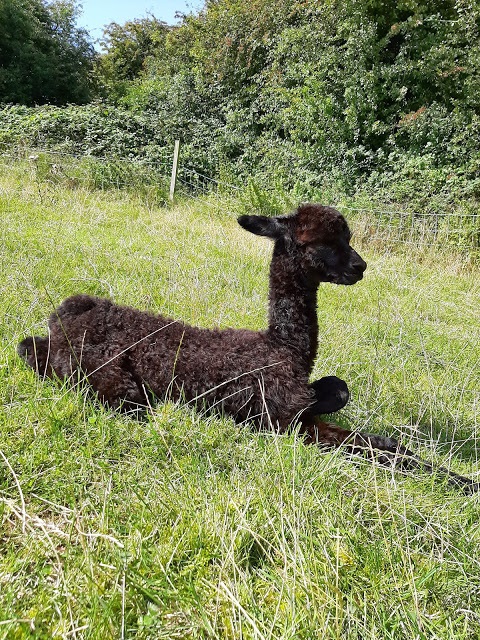 Karma. That’s what most of us have said at one time or other when we hear of a terrible incident that occurred to an individual or group of people. And if Karma is behind everything that happens, what did Hilltop Farm do to deserve its fate.

What has brought this on, you might ask. Well allow me to retort. On 27th August this year a cria that we called Ezekiel was born to this world. But it was anything but a straightforward birth. In initially he appeared to be in the perfect position, his head and front legs were out and it was up to his mother, Isabella, to push a few more times and he would be born. But little Ezekiel was gasping for air. Our vets HGM Veterinary Services in Tullamore were called immediately and with a little help from the staff at Hilltop Farm, Ezekiel arrived just as our vet did. The cria was still gasping for air and Catriona blew into his mouth and suddenly his breathing regularised somewhat – but not entirely. The vet got there and examined Ezekiel and found that there was fluid on his lungs and he also noticed that the umbilical cord was not intact. Somehow it had been ruptured in the womb and this had caused the little boy to gasp for air. Under normal circumstances he would have been getting his oxygen from his mother. The vet explained that this lack of oxygen most likely would cause him to have a reduced mental capacity. However, within half an hour of being born Ezekiel was up on his own four feet and walking around – Staggering might be more correct. All seemed to be heading in the right direction. But Ezekiel did not drink from his mother because he didn’t know he was supposed to. Why you might ask. That was the first sign that he was in fact slightly brain damaged – it was now up to us to bottle-feed the little boy.

To look at Ezekiel walking around the paddock you would not have thought he had less of a mental capacity, but just a little quirky. And because of the attention he was getting from us, he was more inclined to hang around with us that the other alpacas. He would run to meet you at feeding time. He always recognised the bottle. We always tried as best we could to include his mother in the process so that a bond could be formed between Isabella and Ezekiel – but alas nothing ever came of it. She looked after him every day but he didn’t recognise who she was. Occasionally she stood for him to drink from her but he just went about his own business, nibbling at everything except what he was supposed to.

After a couple of days, his breathing deteriorated and the vet confirmed that Ezekiel had developed pneumonia. Even after the injections he had given him to clear his lungs.

We took turns every night to stay with Ezekiel out in his shed. We had to be sure that he wouldn’t go out in the cold air and of course to ensure he got his quota of milk. The little boys was so playful and believe it or not, he never once stepped outside the shed. Sometimes he would just sit and stare at the wall but then we realised that some of that time he was asleep even though he always sat up perfectly straight.

Soon however his breathing deteriorated and it became audibly harsh. After trying some things out, it became clear that his breathing was much better when he stood and incredibly he learned a trick. When we would count one, two, three up, he would get to his feet and stare proudly either at us or at the wall of the shed. Either way, he was visibly happy.

Our vet had been out several times to see him and tried absolutely everything to rid Ezekiel of his pneumonia. Very early, before sunrise on Friday 13th September, the icy cool air was getting the better of the little boy and so we decided to bring him into our house. Yes, we had a baby alpaca in our sitting room. He was so content. He sat on a blanket in the middle of the floor and watched television. He stared up at the screen and it looked for all the world as if he knew what was going on. He even waited until he was brought out to the front lawn before he did his poo. A toilet trained alpaca.

Ezekiel nibbled everything in the sitting room to his heart’s content. He often stood there, ears pricked up with that proud face showing.

But the following day, Saturday, he became lethargic. He spent a couple of hours at the front of our house in the fresh air. The vet had dropped out to see him that morning and though he looked a little better that the last time he had seen him but he still explained that there was a harshness still in one of his lungs.

Ezekiel slept on and off that day both inside and outside the house. He was getting progressively weaker and at 3:41 on Sunday morning he passed away after a two and half week struggle with an immovable pneumonia. The quirky little cria with the strongest will to live and the cutest little face was gone.

Alas, even though little Ezekiel has passed from this world he will always be in our minds. He was the alpaca with the slightly reduced mental capacity that could entertain us, learn tricks and be so obedient. We might never see the like again.

All at Hilltop Farm