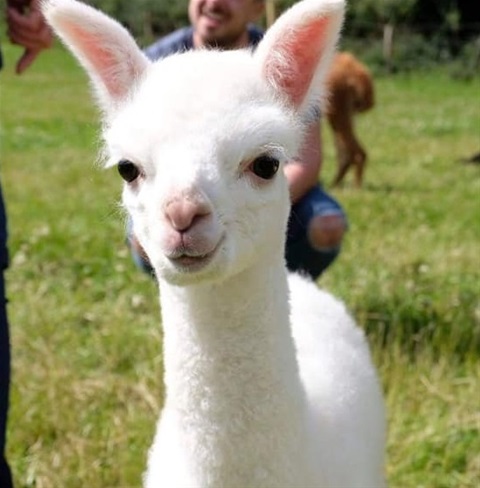 This is not an ad for a new Ed Sheeran album. Yes, two of his albums have been named after mathematical symbols, but this blog story is completely different. There are some similarities between this story and popular music in that both are about gain and loss, personal and general.

So let me start with our story. Some of you will have read some of our previous blogs and some of you will have been here to see our alpacas. For those of you newbies, we are Hilltop Farm Alpacas. We are a small holding of 17 alpacas ranging in age from two weeks to ten years old at the time this blog has been posted. Hilltop Farm is set in North Offaly and is a perfect setting for those of you who want to get away from the busy lifestyle that is considered to be normal, if there is such a thing as normal any more. But that’s a discussion for another day.

On the 18th June 2020 a new cria (baby alpaca) was born into Hilltop Farm. A male; another progeny of our magnificent male, Bronson. Again, those of you who have been here will know all about Bronson and what this guy is like. He loves human attention and he adores being photographed and he even stands for selfies and that is something he taught himself to do – believe it or not.

This all sounds great, right? This little male born on the 18th June was very little. His mother was a first-timer. She had never given birth before. Early on the morning she gave birth she was showing signs of discomfort. Bella was her name and she was four years old. She was a fit female and had a deer-like face and always appeared to be smiling. You may have guessed that speaking about her in the past tense that she is no longer with us.

Bella was unable to give birth to her cria by herself. Our vet told us that the cria was not in the correct position to be birthed and that he would have to operate there and then – a C-Section. The little cria came into the world smaller than the average cria. The average weight of a new-born is 7kg but this little boy was only 4.8kg. He was tiny. This pure white fleeced boy was given the name Fargo and he looks like a Fargo although I can’t quite say what a Fargo should actually look like.

For four days Bella provided milk for her little boy but she was in pain from the operation. On the fourth evening she died from infection that had set in. It was always going to be a worry and the vet had done all he could for her. He had recommended that we try bottle feeding Fargo before Bella died so that he would be used to it, if required. It was and he took to it like a duck to water.

Almost four weeks on from his birth, Fargo has grown. He is the funniest animal we have ever had here. The little guy is a firm favourite of our many visitors and he knows how to play up to people so that he can get all the attention. But that is also something that has been handed down to him by his father – the one and only Bronson.

Fargo is most definitely one of the positives of the last few years. He was a miracle baby but he came at the sad loss of Bella. But as Ed Sheeran says he is Perfect and he now lives in his Castle on the Hill.